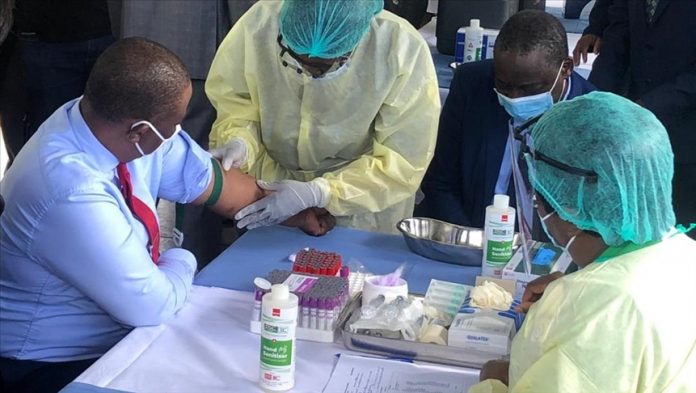 HAVING received the first delivery of 200 000 doses of China National Pharmaceutical Group (Sinopharm) vaccine donated by the Chinese Government in the fight against COVID-19, Zimbabwe has began inoculating its citizens.

The Sinopharm vaccine is approved in China for general public use and is also used in the United Arab Emirates (UAE) and Morrocco.

There is need to demystify the fear triggered by thinking history vis-a-vis vaccination and point out the truth regarding vaccines.

Health personnel were trained to safely deliver the vaccines.

Government has implemented strategies that provide clear and accessible information on the vaccines as required by the WHO.

However, there are numerous misconceptions about the vaccines.

“There is no guarantee that the jab will work and there are so many ‘complaints’ going around regarding vaccinations efficacy. My decision regarding own vaccination is shrouded in fear. What if I get severely sick afterwards?” asked one citizen.

Most of the fears are unfounded.

According to Phyllis Arthur, managing director of Infectious Disease and Diagnostics Policy for the Biotechnology Innovation Organisation (BIO), recommendation of care providers is the most important factor in the decision whether to vaccinate and “Doctors need to be incentivised to stand up for vaccines … They also need to be told how to communicate.”

This is the belief among many that natural immunity is better than vaccine-acquired immunity.

Biological warfare and bio-terrorism are often used interchangeably, but bio-terrorism usually refers to acts committed by a sub-national entity, rather than a country.

Biological weapons are not just a 21st Century concern: humans have used infectious agents in conflicts for hundreds of years.

In a 1336 attempt to infect besieged city dwellers, Mongol attackers, in what is now the Ukraine, used catapults to hurl the bodies of bubonic plague victims over the city walls of Caffa.

Tunisian forces used plague-tainted clothing as a weapon in the 1785 siege of La Calle.

It is not clear whether they actually carried out these plans. But, whatever its source, smallpox did spread among Native Americans in the area during and after that rebellion.

The Japanese used plague as a biological weapon during the Sino-Japanese War in the late 1930s and 1940s.

They filled bombs with plague-infected fleas and dropped them from airplanes onto two Chinese cities; they also used cholera and shigella as weapons in other attacks.

An estimated 580 000 Chinese people died as a result of the Japanese bio-weapons programme.

The US military developed biological weapons and investigated their effects in the 20th Century. The US army’s Biological Warfare Laboratories was based at Camp (later Fort) Detrick, Maryland, from 1949 to 1969.

The programme produced and weaponised several biological agents, including anthrax and botulinum toxin, though the biological weapons were never used in conflicts.

History shows that anthrax was used to slaughter Zimbabwean forces during the liberation struggle and the effects have been felt years after our independence.

In 1975, the Biological and Toxin Weapons Convention (BTWC) came into force.

More than 100 nations, including the US, have ratified this international treaty which aims to end the development and production of bioweapons. In spite of the agreement, bioweapon threats from fringe groups, terrorists and nations not committed to or observing the convention continue to worry public health authorities.

According to Ian Amanna et al Viral Immunol (2005) titled Public fear of vaccination: Separating Fact From Fiction: “Public confidence in vaccination may erode because of real or perceived risks associated with immunisation, and this in turn may lead to lower vaccination coverage and loss of herd immunity.”

The scientific American Custom Media also produced an article titled: “Regardless, the overall efficacy of vaccines is largely dependent on coverage, so when coverage dwindles, outbreaks occur.” (entificamerican.com).

The analysts argue: “The first step to improve vaccine uptake is to address the fear that prevents it. It is not like people fear vaccines for the same reasons.”

General members of the populace must be comforted that no matter what vaccine, “Countries must have systems in place to detect any adverse reactions or events following vaccination.”

The system must allow for any side effects to be quickly identified, properly logged and managed in community or health facility and reported directly to the manufacturer to determine if the event is related to the vaccine.

The system must also be prepared to treat any potential side effect that may be reported from the vaccine.

According to dw.com, airing a television programme, it is normal to have certain reactions after a vaccination: There may be redness, swelling or pain around the injection site.

Fatigue, fever, headache and aching limbs are also not uncommon in the first three days after vaccination.

The reactions are argued to be usually mild and should subside after a few days.

It is also argued that the reactions show that the vaccine is working, because it stimulates the immune system and the body forms antibodies against the infection that is only ‘feigned by the vaccination’.

dw.com produced an article that argued such typical vaccination reactions

have also been reported after receiving the BioNTech-Pfizer, Moderna, AstraZeneca and the Russian Sputnik V vaccines which are already in use.

The article further argues: “The approved vaccines are safe according to the European Medicines Agency (EMA), the US Food and Drug Administration (FDA) and the World Health Organisation (WHO); otherwise they would not have authorised the vaccines.”

According to Centres for Diseases Control and Prevention, in a report dated January 15 2021, titled Morbidity and Mortality Weekly Report (MMWR), allergic reactions, including anaphylaxis, after receipt of the first dose of Pfizer-BioNTech COVID-19 vaccine in the US was noticed on December 14-23 2020.

Anaphylaxis is a severe, life-threatening allergic reaction that occurs rarely after vaccination.

And 71 percent of these occurred within 15 minutes of vaccination.

The report argues that an adverse report following vaccination does not mean that the vaccine caused the event.

Although vaccines are known to cause minor, temporary side effects such as soreness or fever, there is little, if any, evidence linking vaccination with permanent health problems or death.

The immune system could never truly be overwhelmed because the cells in the system are constantly being replenished.

In fact, according to the US Food and Drug Administration (FDA) and the CDC as for immediate danger from vaccines, in the form of allergic reactions or severe side effects, the incidence of deaths are so rare they can’t even truly be calculated.

For example, only one death was reported to the CDC between 1990 and 1992 that was attributable to a vaccine. The overall incidence rate of severe allergic reaction to vaccines is usually placed around one case for every one or two million injections.

Gleaned from the members of the public, the fear that vaccines can infect a person with the disease it is trying to prevent has no clinical evidence.

According to CDC records, vaccines can cause mild symptoms resembling those of the disease they are protecting against.

A common misconception is that these symptoms signal infection.

In fact, in the small percentage (less than one in one million cases) where symptoms do occur, the vaccine recipients are experiencing a body’s immune response to the vaccine, not the disease itself.

Judging from previous texts, if too many people do not vaccinate themselves they contribute to a collective danger, opening up opportunities for viruses and bacteria to establish themselves and spread.

Vaccines are one of the great pillars of modern medicine. Life used to be especially brutal for children before vaccines, with  many succumbing to diseases like measles, smallpox, whooping cough or rubella, to name just a few.

Today, these ailments can be completely prevented.

The practice of immunisation, dating back to 100 years, portray successful drives of vaccines as revealed in a research by the University of Auckland titled History of Vaccinations and Diseases Tamed by Vaccines ( 2017)

Variolation (smearing of a skin tear with cowpox to confer immunity to smallpox) was practiced in 17th Century China.

Edward Jenner is considered the founder of vaccinology in the West in 1796, after he inoculated a 13-year-old-boy with vaccinia virus (cowpox), and demonstrated immunity to smallpox.

In 1798, the first smallpox vaccine was developed.

Over the 18th and 19th centuries, systematic implementation of mass smallpox immunisation culminated in its global eradication in 1979, which was a success.

Plague vaccine was also invented in the late 19th Century.

Between 1890 and 1950, bacterial vaccine development proliferated, including the Bacillis-Calmette-Guerin (BCG) vaccination, which is still in use today.

In 1923, Alexander Glenny perfected a method to inactivate tetanus toxin with formaldehyde.

The same method was used to develop a vaccine against diphtheria in 1926.

Mass polio immunisation has now eradicated the disease from many regions around the world.

Attenuated strains of measles, mumps and rubella were developed for inclusion in vaccines.

Measles is currently the next possible target for elimination via vaccination.

Such progress in the history of vaccines points to the success of vaccination and the more reason to be vaccinated against  COVID-19.

History testifies that vaccines are the way to go.