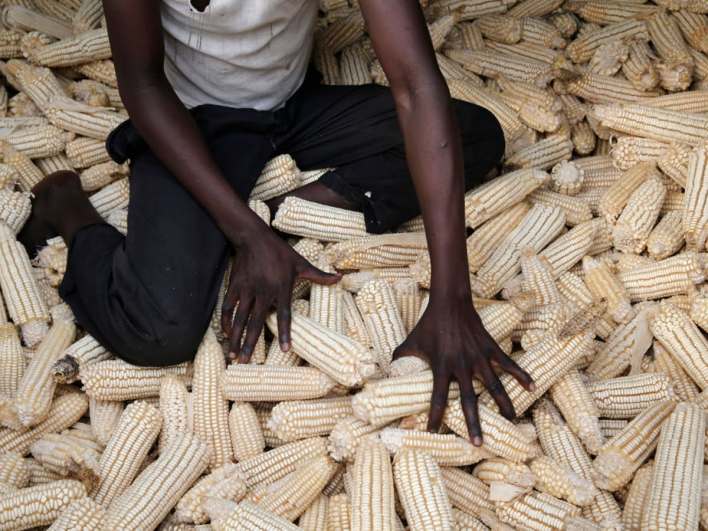 In this valuable partnership between Japan and Zimbabwe, WFP played a fundamental role—using its expertise in supply chain management to procure maize from South Africa and deliver it directly to the Government’s Grain Marketing Board silos in Harare and Bulawayo.

The donation comes at a time when the country is facing serious food shortages induced by drought, inflation and COVID-19. The COVID-19 pandemic has also increased the vulnerability levels in the country as the livelihoods of informal sector workers have been affected by the lockdown. Japan’s contribution of maize also comes at a particularly crucial period for Zimbabwe, on the backdrop of a third successive year of drought which characterised the 2019/20 agricultural season when maize production fell by 7 percent compared to the 2018/19 season. With the country currently experiencing an above normal rainfall season, crop production is expected to improve in 2021, but is still expected to remain at a level 30 per cent below the five- and ten-year averages. The total number of food insecure people now stands at 7.7 million—almost half the population—but the number is expected to go down as the country’s prospects of a good harvest are high.

In receiving the donation, the Minister of Public Service, Labour and Social Welfare, Honourable Professor Paul Mavima, stated that “The Government, through the Ministry of Public Service, Labour and Social Welfare would like to acknowledge receipt of 30,000 metric tonnes of grain from WFP. The gesture was extended as a way of complementing Government efforts in ensuring food security to vulnerable households in the country. This came against the backdrop of the COVID-19 pandemic which caused depletion of the sources of livelihoods of our populace, hence exacerbating their food insecurity. Therefore, the Government appreciates the efforts by our all-weather friend WFP and its cooperating partners in ensuring zero tolerance to hunger”.

H.E. Mr Satoshi Tanaka, the Ambassador of Japan to Zimbabwe, said “The Government of Japan decided to provide this donation of maize given the severity of the current humanitarian crisis in Zimbabwe. I hope that, through WFP and FDMS, it will reach the most vulnerable households as soon as possible so that they can meet their basic needs.”

“WFP’s agile supply chain and global expertise in food procurement and logistics services makes us a trusted and reliable broker in such a valuable partnership between Japan and Zimbabwe. We look forward to continuing to work closely with the Government of Zimbabwe to support and complement its efforts to improve food security in Zimbabwe and together strive towards Zero Hunger by 2030,” said Ms Francesca Erdelmann, the WFP Country Representative and Director.

Japan’s previous support to vulnerable communities in Zimbabwe through WFP has provided food assistance while at the same time strengthening community resilience through the creation of productive assets, such as weir dams and nutrition gardens. It has also provided much-needed nutritional support to expectant mothers at maternity waiting homes across the country.