Meet Kessia Magosha. Most of you know her as an actress and comedian for her role in Muchaneta which used to screen on ZTV. I know many people including me loved her character. She is energetic both on and off screen.

Kessia is also a musician, band leader and energetic dancer who always leaves fans asking for more. She holds a BSC honors degree in Community Development Studies (WUA) and an Executive Certificate in Project Management (UZ). Her music career started in 1999 and has a 10 track album called Gumbomutsvairo which was released to stellar reviews in 2013. The album boasts of a diverse repertoire of reggae, traditional, rumba and soul. Kessia has shared the stage with the Soul Brothers, The Late Dorothy Masuku, Dr Oliver Mtukudzi, Sulumani Chimbetu, Jah Prazah and many more. She has also featured on the local festival circuit, performing at HIFA, The Images Festival, Chimanimani Festival, October Festival, Wafest and The Winter and Summer Jazz. 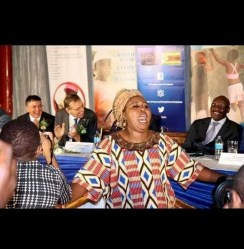 But why I am celebrating her today is how she has used her talents and energy to advocate for worthy causes. She has been part of the One Billion Rising Revolution Against Gender Based Violence Artist Rising since 2014. She has been moving around with many organisations to raise awareness against GBV include rape. She has worked with the Institute for Young Women Development, Adult Rape Clinic, Save the Children, Pzart, The Girls Legacy, Roots, Katswe Sisterhood, Musasa Project among many others.

When Covid-19 hit us, she decided to give back to the community. Using her dressmaking skills, she sew face masks which were distributed to the Harare High examination classes

Kessia is great at Community Mobilisation , Edutainment, facilitation, and MCing for various NGOs over the years in the Women’s Movement. She is also a gender equality advocate and has also participated in campaigns for the rights of people with albinism.

Join in me in celebrating this woman who always makes people laugh but still educating them about important societal issues. I have adopted her as my young sister because we are passionate about similar issues. Well done Kessia