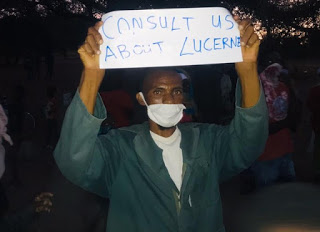 CHIREDZI– The under pressure government has
made amendments to the Statutory (SI) 50 of 2021 which effected the removal of
thousands of families in Chilonga paving way for a Lucerne grass project by the
Kwekwe based Dendairy company.

The amendments made yesterday came
through SI 63A of 2021 where some cosmetic changes were
made but the objective remained the same.

The amended SI 50 0f 2021 torched a
storm with the government receiving a lot of punches over the move.

SI 63A of 2021 only deleted some words
where previously the government had gazetted a Lucerne grass project and now
refer to it as just an irrigation scheme.

“It is hereby notified, for general
information, that the communal Land (Setting Aside of Land) (Chiredzi) Notice,
2021, contained errors-

“The statutory instrument is corrected-
(a) By the deletion of the words “Minister of Local Government, Urban and Rural
Development” and the substitution of Minister of Local Government and Public
Works (b) In Section 2 by the deletion of the words “purpose of lucerne
production” and substitution of “establishment of an irrigation scheme,” reads
the correction.

On Friday last week, the Magistrates
Court gave a temporary relief to stop the evictions after the Zimbabwe
Environmental Lawyers Association (ZELA) filed an urgent chamber application
seeking to interdict the government from going ahead with its plan.

Chiredzi South and East Members of
Parliament (MPs) whose people are being affected have refused to comment on the
move.

Chiredzi South MP Denford Masiya told
TellZim News that the matter was way above him and could not comment.

“This is something which is above me as
an MP and I am sorry I cannot comment on that,” said Masiya.

Minister of State for Masvingo
Provincial Affairs and Devolution Ezra Chadzamira said no one will be evicted
from their land but rather people will benefit from the project.